My research is focused on the molecular mechanisms that regulate the development of the pancreas. I am particularly interested in the pathways that specify pancreatic cell fate and control pancreatic growth. Defects in these mechanisms may contribute to diseases such as diabetes mellitus and pancreatic cancer. My long-term goal is to identify pancreatic stem cells and other progenitor cells, and to compare the gene expression profiles of these cells with each other and with their differentiated progeny. With this approach, many components of the genetic networks that regulate pancreatic development would be identified, and their specific functions would be further characterized. This research will provide information necessary to control the behavior of the pancreatic cells in vitro and in vivo, and lead to alternative treatments for diabetic patients. In addition, by comparing the gene expression profiles of the pancreatic stem cells and other types of stem cells, we should be able to identify common genetic requirements for cellular self-renewal.

During early embryogenesis, the single layer of midgut endoderm epithelium evaginates to form the pancreatic buds (one dorsal and one ventral). These buds go on to proliferate, branch, and differentiate. The molecular pathways that control these processes are largely unknown. By combining custom DNA microarray analysis with modified single cell PCR, I have developed a system to study the gene expression profiles of single cells at different embryonic stages. With this technique, I have identified pancreatic cells at different stages of differentiation. In addition, these cells can be aligned in a developmental pathway (Fig.1). Among these cells, a particular population of cells that unexpectedly co-express transcription factors PDX-1, Nkx2.2, Nkx6.1, and p48 may represent multi-potent progenitor cells. I plan to extensively characterize the gene expression profiles of these different cell types, and to identify specific signaling molecules or transcription factors required for growth and differentiation of stem cells or progenitor cells within the pancreas.

In addition, I have used the single cell PCR products of different pancreatic cell types for small-scale differential screening. I have identified a numbers of novel genes and confirmed their specific expression in developing pancreas by in situ hybridization (Fig.2). Some of these genes encode molecules similar to known proteins, and some of them are not homologous to any known genes. The specific functions of these genes will be studied in cultured pancreatic cells or in genetically manipulated (transgenic or knock-out) mice.

The upper panel of each figure shows the hybridization result of the custom microarray with probes made from various pancreatic single cells. The lower panel of each figure summarizes the combination of pancreatic genes expressed in each particular type of cell. Fig. 1A, 1B, 1C, and 1D illustrate the sequence of exocrine cell differentiation during pancreas development. Fig. 1A, 1B, 1E, 1F, 1G, 1H, and 1I illustrate the sequence of endocrine cell differentiation. Cells shown in Fig. 1A and 1B may represent the common progenitor cells for both pancreatic exocrine and endocrine cells. 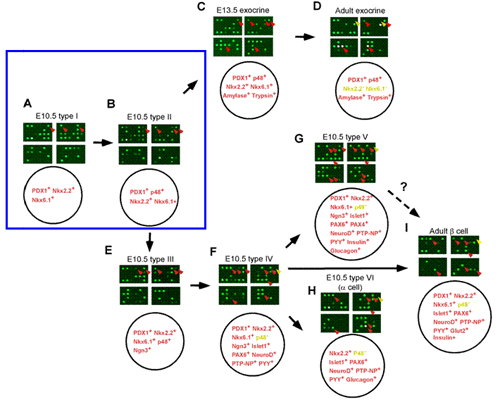 A-D, In situ hybridization with probes made from four sample novels genes on sagittal sections of E10.5 embryos. Note that each gene has a specific expression pattern within the pancreas. P, Pancreas; S, Stomach. 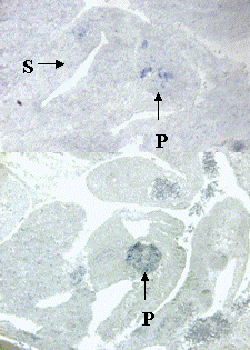 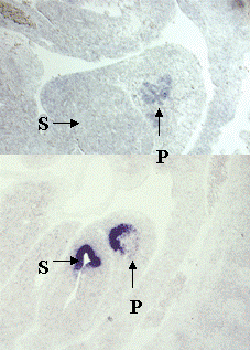